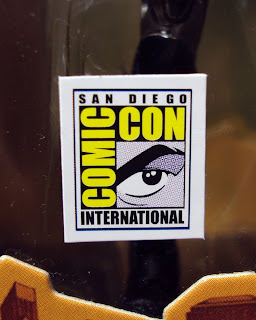 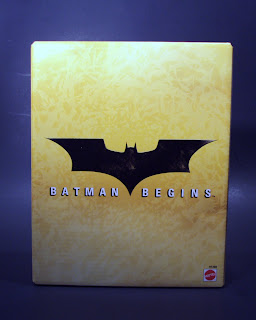 I did not attend SDCC 2005, in fact, I've never attended any SDCC event, yet, but that doesn't mean I can resist the exclusives action figures! Especially when it's a Batman figure from my favorite comic-book film of all time! That's right, favorite, even more than The Dark Knight! I picked this figure up on eBay that year and I can't remember exactly how much it cost, but I know I paid less than $30 after shipping, so it wasn't an impossible figure to obtain. This figure fits right in with the movie tie-in line of 5" action figures. 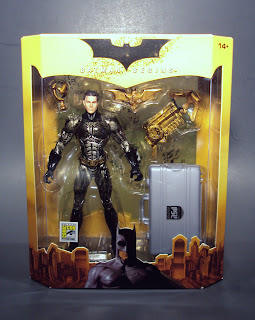 The figure comes packaged in a window box with an outer mailer box bearing the Batman Begins logo. Once you cut or pull off the tape on the top, you can open up the flaps and slide the inner box out. 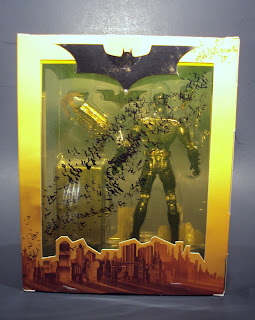 The packaging works great for display if your the MOC-type, but you can remove the figure while keeping everything intact. The window box matches the rest of the "Begins" line of action figures and features some cool designs. 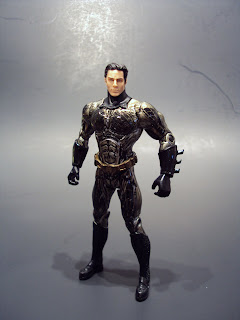 This figure attempts to capture the look of Christian Bale's bat-suit from the scene where Lucius is showing Bruce around the "Applied Sciences" department ("I want to borrow it, for... spelunking") before Wayne paints it all black. For the most part, this is the exact same sculpt as the standard release "Battle Gear" Batman, even includes the same accessories (also has the bat logo sculpted on the chest). The differences being the paint on the suit & accessories, the Bruce Wayne head (taken from the "Ninja" Bruce figures) and the lack of a cape. 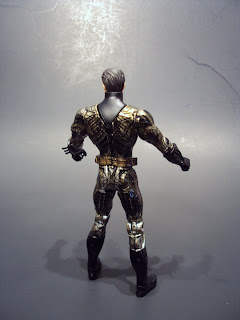 It captures Bale's likeness in a sort of vague way, also the fact it's missing the cape causes it to have a gap between the upper torso and the neck piece. Of course, this figure is unmasked and to be true to the film, should not have that neck piece, but this was pre-Movie Masters, so you had to take what they gave you. The belt is a separate piece that's added on to the main body. 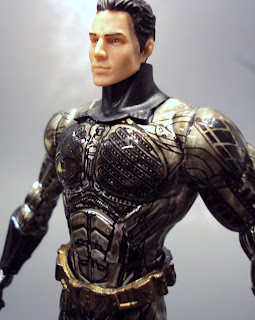 The used a gray base on the suit with black detialing to make it look very intricate just like in the film. Then they added a clear coat, which unfortunately is really glossy and kind of ruins the effect for me. The gauntlets, gloves, boots and neck piece are all molded in black and have the added gloss like the "Battle Gear" Batman release. 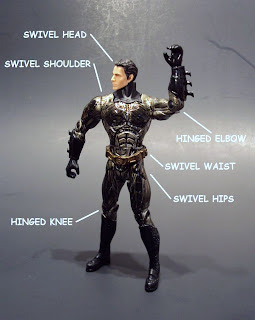 Articulation is pretty basic here for an action figure of this scale. The "waist" swivel is limited because of the belt, which sits below his actual waist. Everything else moves freely. 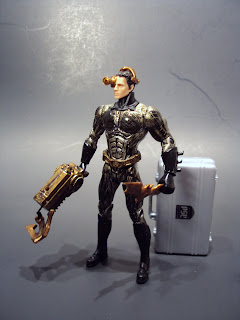 This version of Batman, er... rather, Bruce, includes the same battle gear as the figure he shares his sculpt with, which includes his grapnel gun w/hook, folding batarang, some sore of telescopic headgear, and a large case to store all his stuff. The grapnel gun would have been cool if it was built to scale, but instead it's enlarged to include a stupid action feature. You pull on the hook part and the mechanism inside the gun retracts the rope. Would have been cool if the rope was three times longer, or if you can "lock" it in the extended position then press a button to retract the wire, hoisting Bruce upwards. The folding batarang is a nice touch, it's very much movie accurate. It may be a bit too big for the figure, but is well-made (I think I may have to see how it works for the Movie Masters figures). The headgear is just weird. It only has one "lens" and doesn't fit the Bruce head as well as the Batman figure's head. I'm not sure what it's supposed to be, but looks really ridiculous on his head. 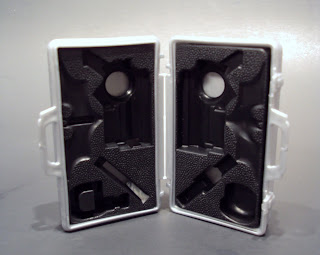 The case is a cool touch, it's interior is molded to hold each of his accessories, the hook gun being the trickiest to place correctly to allow the case to close completely. 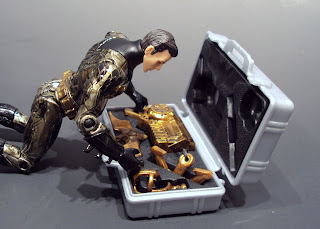 There were two versions of this exclusive, the variant featured the same body with a regular Batman head. I wasn't a fan of that look, but I was very into this one at the time. I'm happy with the figure overall as I collected the majority of the figures in the Batman Begins line (I steered clear of the 200 gimmicky repaints of Batman and just went after the core figures) and this of course was three years before they would have the 4 Horsemen work on the Movie Masters line. If your a completist, I recommend you chase this one down, it's not ridiculously expense or all that hard to find on eBay, but it's not the best Bruce Wayne figure ever, so casual collectors can skip it. 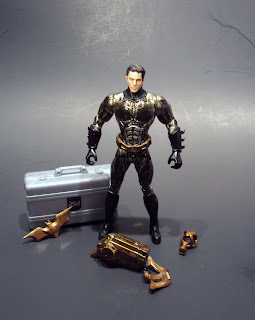 "Battle Gear" Batman's case on the left, SDCC Bruce's case is on the right: 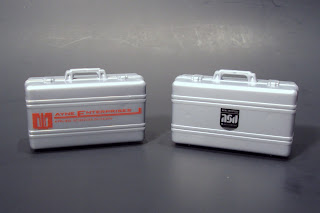 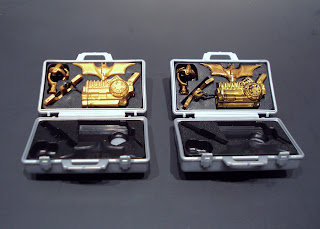 Here the SDCC figure is wearing a "Ninja" Bruce's mask: 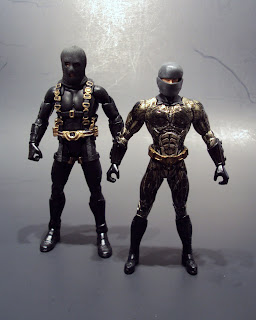