"Finally! The Rock has come back to Miami!"

This is the first "The Rock" figure I pick up from Mattel's WWE toy lines. The figure comes to us from the "deluxe" WWE Entrance Greats series and recreates his entrance at the 1999 Royal Rumble. Is this figure worth the price of admission or just filler until you can find WWE Legends Series 3's the Rock? 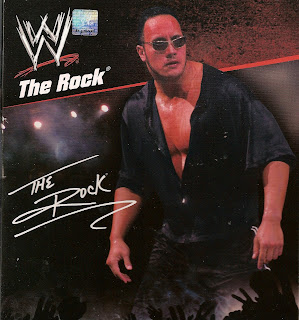 Undoubtedly one of the most entertaining Superstars in WWE history, The Rock shone whether he was hero or heel. He was just as popular as Stone Cold Steve Austin and probably twice as charismatic. Fans of the WWE may remember him wearing this outfit for several months. At the time, I thought it looked ridiculous, but eventually found out why he wore it. I read an interview with the Rock where he revealed he had plastic surgery on his chest because he had "man titties." He wore the track suit to hide his wounds while they healed and still be able to perform in front of live audiences. 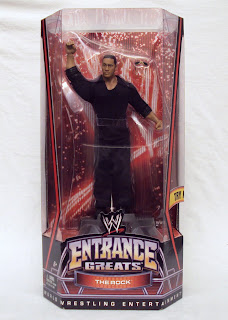 The Rock is packaged in the standard "Entrance Greats" window display box with a "TRY ME" opening on the right side allowing you to preview the Rock's entrance music that emanates from the display base. The backside of the box features a picture of the Rock from the event the figure is based on and an anecdote related to the match he performed in. 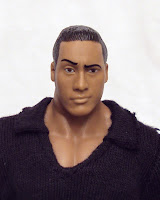 The likeness on the figure is consistent with what Mattel's being doing throughout all their WWE product lines. The 3D scanning translated marvelously on The Rock. The expression on his face is classic Rocky, raising the "People's Eyebrow". The paint application on his face is clean and that's important on the Rock, especially, because I've seen several figures throughout the line with some crooked eyebrows. 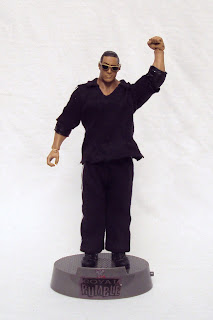 Of course the meat and potatoes of the Entrance Greats line are the outfits each wrestler is packaged with. The Rock includes his Polynesian Recovery Suit in the form of two separate pieces (shirt and pants) and removable sunglasses.

Unlike all the cloth shirts included in the Elite & Legends series, the track suit's shirt does not open on the back. It is made of a stretchy material that allows you to remove it as you would your own t-shirt. It's a little fussy, but not impossibly difficult to navigate. The pants slide down and off his legs, but can also be a little fussy for two reasons: 1. the knee pads and 2. the leg articulation (more on that in a moment).

As is tradition in the Entrance Greats line, once you strip off the elaborate attire, you have the wrestler is his more common ring attire. The Rock includes his black wrestling shorts, this version featuring his trademark "Brahma" bull and "The Rock" logos in silver with blue trimming. The tampos are clean, but because of the articulation (again, more on that in a moment) are chopped up on the sides, requiring you to put the legs in a certain angle to line up the logos properly.

Articulation is the main drawback to the Entrance Greats line. It hurts figures like the Rock because it ruins the images on the his trunks, something the Elite-level articulation does not hinder as the lower torso is one piece instead of divided among three pieces. Granted, if you buy an EG figure, you're mainly going to display him with his entrance attire, but still. 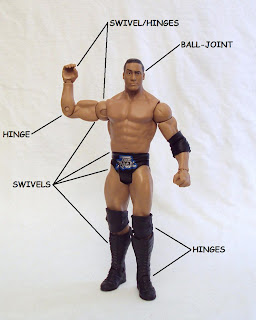 Also, the rudimentary swivel hips keep his legs so close together that dynamic poses, even limited ones, are out of the question. You can see all the various points of movement on the Rock in the above image.

I want to make special mention of the Rock's boots. If you're familiar with the Superstar, you know he wears very distinct wrestling boots that feature an opening on the back, revealing his calf muscles. I was curious to see how Mattel would handle these and I'm happy to report they got them done right! The boots are one piece featuring the opening on the rear calf area, the top portion is designed to fit around Rocky's lower legs with the peg connecting about halfway down. They perfectly recreate his boots in an authentic manner. The only downside to the boots is the color or, more precisely, the finish. The Rock wore shiny, patent-leather style boots. The figure's boots are a flat finish. A minor detail, but worth pointing out for accuracy's sake.

At $20.00 the Entrance Greats line is over-priced. Last month when Toys R Us was selling them at $15 a pop, I felt it was a better deal, but at the current price (as high as $21.99 at Kmart), they should be an easy pass. If Mattel wants to keep these on the shelves, they're going to have to at least add the Elite/Legends articulation. I guess that's what the upcoming "Defining Moments" line will be, as I understand they will be similarly priced but include the superior articulation model. That kind of puts "EG" in a strange place and I don't know if they'll continue the line. This version of the Rock would have been a great addition in that line, but they already have him scheduled for the second wave, only there he'll be in his flashy dress clothes and feature a "Rock & Sock Connection" jacket.

I'm still on the fence about whether or not to return him. I'm inevitably buying the Legends Rock, so I don't think I need to have $35+ worth of Rock figures lying around. Conversely, if you have the stitch for it, you'll probably be happy with both and you can always slap the track suit on the Legends Rock. If not, you're better off waiting for a sale on this one.