While WWE Legends series 3 is starting to hit online retailers and possibly "brick and mortar" stores, too (not in my area, though), we're dipping back into the first wave, more specifically, the Kmart exclusive Hall of Fame edition with today's review of "The American Dream" Dusty Rhodes!

I guess each person's idea of the "American dream" is different, but in the late 80s, Dusty Rhodes was it. I mean, who didn't want to wrestle in polka dots and do a funky dance in the middle of a wrestling ring? I know I did! 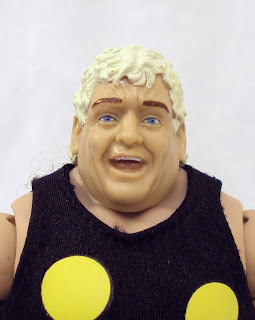 Here Dusty is captured with a great expression on his face. He's just having a good 'ol time and that is perfect for his "character." I prefer having some sort of reaction on the figures' faces as opposed to blandly sculpted figures like Triple H and the first Rey Mysterio in the Elite line.

Dusty also has a pretty much 100% unique sculpt. Not that it will be the last time you see it, but it's the first time it appears in the line as Rhodes is on the heavier side of the scale. Plus, he wrestles in cowboy boots, so those are new, too. The paint on Dusty is mostly good, although the yellow dots on his trunks and pads are a bit weak and some of the black shows through. Aside from that the dots are perfect little circles and recreate his famous look perfectly. His wrist tape is painted on as is standard with Mattel's wrestling figures. The paintwork on his boots is great, with "Rhodes" painted down the side of each boot. It's a little difficult to see in the photos, but there's also some sort of phoenix design on the boots. 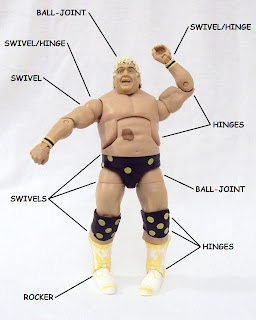 Articulation is standard on Dusty, albeit a bit hampered due to his added bulk, but no more than the aforementioned Triple H or similarly sized grapplers. In one of the recent "Ask Matty" Q&A (can't remember the site) someone asked about adding pectoral articulation and/or double-hinged elbows (I know I want them!), but Mattel gave the usual "we're always trying to blah blah blah". So only time will tell what happens in that department. 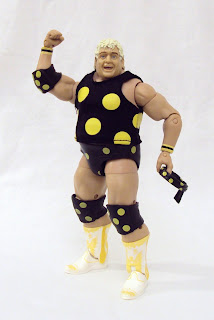 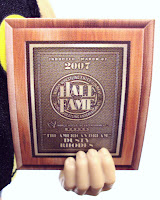 I'm always conflicted on how to count accessories with these figures. While you can argue that elbow and knee pads are part of the costume, they are removable and therefore can be counted as accessories. Rhodes has two knee pads and a right elbow pad. On top of that, he has a removable tank top, made of cloth (with a Velcro strip on the back) and a removable headband. The headband is molded plastic and slips on over his head easily. This being a "Hall of Fame" edition figure, Dusty is also packaged with a gold display base, a HoF name tag and plaque. The plaque is just a small piece of cardboard (like the name tag) with a printing on one side displaying Dusty's name and date of inception into the WWE Hall of Fame. Like I mentioned in my Jimmy "Superfly" Snuka review, it would have been awesome to have a small plastic square with a sticker on it, instead. The cardboard can be bent too easily and depending on how often you handle it, will just become dog-eared after a while. 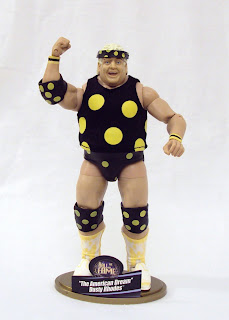 Dusty Rhodes is one of those wrestlers I remember watching as a small boy. It's great to have such awesome representations of my favorite childhood Superstars in the Legends line and I'm pleased with this figure. The Legends line continues to roll out fantastic toys with great accessories and I'm enjoying it tremendously. At roughly $15 (plus tax) these figures are similar to Mattel's other collector line, DC Universe Classics and are premium priced. Ideally, they would sell these for less, I think $12 is reasonable, but $10 would be ideal. In the end, it's up to you how much you're willing to spend on 7" of "American Dream", but if you're a collector, you're already aware of the state of the action figure market. However, Dusty doesn't disappoint and any fan would be well served with this version. The only thing he's missing is a Sapphire figure!